You are here: Home1 / Collections2 / Industrial History3 / Samson Fox and Leeds Forge: From the Banks of the Aire to the Cote d’A...

Directly outside my office at Leeds Industrial Museum is an impressive, almost life size, oil portrait of an apparently satisfied industrialist sporting a ruddy complexion and what might today be termed a ‘hipster’ beard. The individual is Samson Fox. The portrait shows Samson standing in what at first sight seems to be a picturesque landscape.

The painting hangs in a rather dimly lit staircase and it would be easy to miss the partial background depiction of an industrial scene. This is no generic scene, but is in fact Leeds Forge, where Fox made his fortune. In front of the works are the River Aire and the course of the Leeds & Liverpool canal, each were – in their own way – crucial to the development of industry in Leeds and further afield. In an effort to avoid over-familiarity breeding contempt, I thought I would do Samson the courtesy of re-capping his story. Fox is probably best known for his invention in 1877 of the corrugated boiler flue. “So what?” might be a typical response, but when it is considered that the design was almost universally adopted by the British Admiralty, the French Navy and many major steam ship lines, the impact of this Leeds-built product becomes apparent. This remarkably simple, but until that point, elusive, development involved hydraulic presses to corrugate standard flues, giving them improved heat transfer and compressive qualities. The workforce of Leeds Forge were proud enough of their totemic product that their dedication on the Fox portrait was painted on a moulded likeness of a Fox Corrugated Flue. Dedication to Samson Fox executed on a likeness of his corrugated flue, Leeds Museums & Galleries.

Fox made significant advances in other areas of transport, most notably in railway rolling stock design. Thanks to hugely powerful steam hammers of the type pioneered by James Naismyth (whose other claims to fame incidentally included throwing his Bridgewater Foundry business card into the crater of Mount Vesuvius), Fox was able to conceive of large, weight saving single piece castings for a host of applications from wagon bodies to wagon bogies. In 1882 Fox patented the first pressed steel underframes for railway rolling stock. Fox’s pioneering work influenced the development of pressed steel underframes and all-steel railway cars in the USA following his establishment of a plant in Chicago. 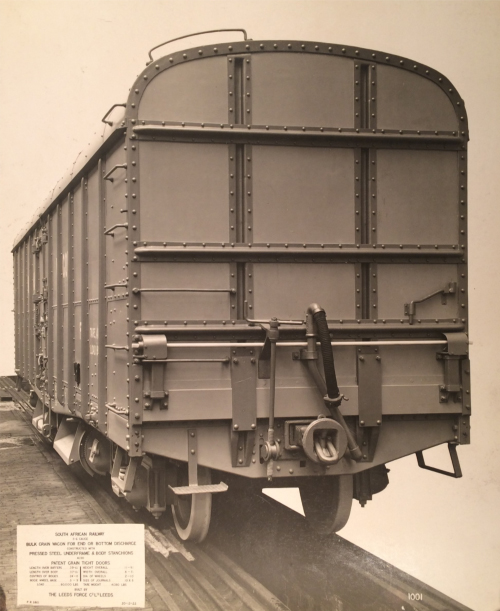 These far-from-glamorous products represented essential marginal gains in the endless search for greater economy and efficiency in the transport of goods in the late 19th and early 20th century. Leeds Forge produced huge numbers of all steel wagons which were lighter than their wood and steel predecessors, which meant that less coal was required to haul them. Later accounts state how Fox observed that a lightweight bicycle could carry the same weight person as a heavy weight version.

Leeds Forge also had a well-earned reputation by building complete railway carriages, many of these for premier luxury passenger routes overseas. Most noteworthy was the contract to build 40 all-steel cars for the Companie Internationale des Wagons-Lits, an order worth a cool half a million pounds sterling to Leeds Forge. The Leeds Mercury trumpeted this news in July 1922 with the headline ‘Leeds Touches a New Industry’. The article went on to speculate that ‘to ride in these cars must be to experience splendour and luxury similar to that provided on the best ocean liners’ and that ‘one is in a first class modern hotel in either case’. The ‘S-class’ cars were made with all-steel bodies and finished in a new livery of blue body sides with gold lining and white roofs. This new-look carriage was a radical departure from the wooden bodied carriages previously used by CIWL. These Leeds-built cars set the trend for future carriage design and became the iconic face of luxury travel in Europe, even into the 21st century. Born in the industrial crucible of Leeds, these prestigious cars were to run on the CIWL’s new Calais-Mediterranee Express, which was to become better known in the public mind as the Le Train Bleu or The Blue Train. The trains were fitted out with wood paneling and furniture by the famous Waring & Gillow of Lancaster and the restaurant car fitted with a decorative glass panel by Renee Lalique. Such was the train’s hold on the French public’s imagination that it provided the inspiration for the 1924 ballet Le Train Blue, featuring Picasso’s background mural Deux femmes courant sur la plage, now in the V&A collection. A Compagnie Internationale des Wagons-Lits carriage at Buchs station, between Switzerland and Liechtenstein. Leeds Forge pioneered the company’s iconic blue carriages (Image: Murdockcrc: Creative Commons)The Leeds Forge carriage designs also featured the innovation of single-occupancy cabins aimed at business and other travelers desirous of privacy. The possibilities for intrigue and secrecy offered by this discreet new accommodation feature may not have been lost on Agatha Christie when she laboured over her 1928 novel The Mystery of the Blue Train. Sleeping compartment made by Leeds Forge in a mix of night and daytime layouts, Leeds Museums & Galleries

It might be hard to comprehend that iconic objects like the Blue Train carriages were born on the banks of the River Aire at Armley and Newlay. Fragments of the main Leeds Forge site pictured in Samson Fox’s portrait still survive – mainly in the shape of tall retaining walls looming over the Leeds & Liverpool canal. Ultimately, the scale of the operation built up by Fox was key to the Forge’s products being greatly sought after worldwide. The ability to shape and fold steel as easily and neatly as a waiter on The Blue Train would fold a serviette, was clearly a matter of pride for Leeds Forge employees and owners alike. Ironically however, the prestigious order turned out to be a financial disaster for the company, leading to the closure of the site in 1929.

Find out more about our Industrial History collection.