Uncover the adventures of Curator of World Cultures Antonia Lovelace, as she embarks on a trip to Nepal to find inspiration for the Voices of Asia gallery and the upcoming ‘Himalayan Fashion’ exhibition. Antonia at the Birthplace of Buddha in Nepal at Lumbinī, a Buddhist pilgrimage site.

This October I spent 14 days in Nepal seeking inspiration for a forthcoming Buddhism display in the Voices of Asia gallery at Leeds City Museum, and the Himalayan Fashion exhibition which will take place at Lotherton from 23 March to 26 December next year. The trip was partly funded by an ACE research award, and I also joined a group tour around central and southern Nepal. 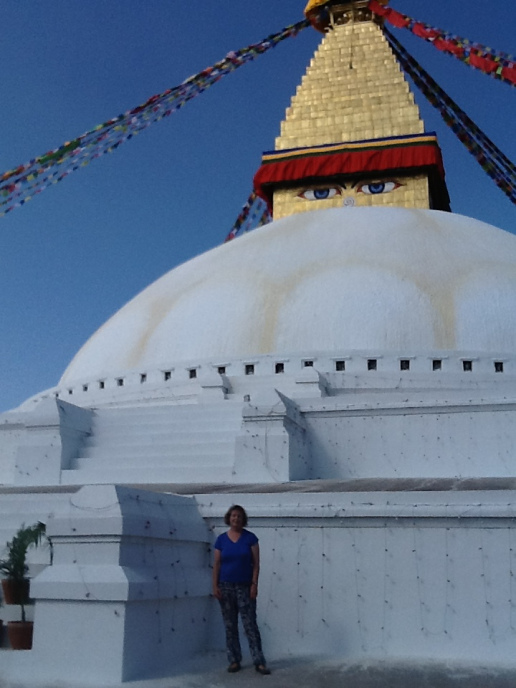 Antonia outside the Boudhanath Stupa in Kathmandu, Nepal.

Buddhist insights came from visiting two stunning stupa heritage sites, at Swayambhunath and Boudhanath in the capital, Kathmandu.  Both have enormous white domes with faces painted on, and are surrounded by shrines and small temples. A huge vajra wand stands at the top of the 300 or so steps leading up to Swayambhunath. Stupas contain holy relics and model stupas when placed on Buddhist altars represent the mind of the Buddha. We have since purchased a model stupa for the new display from the Pink Lotus Buddhist shop in Lancashire. The Buddhist Art Gallery at the National Museum in Kathmandu, and the Patan Museum, also provided lots of opportunities for deepening an understanding of Buddhism in all its complexities. Another highlight of the trip was a visit to Lumbini, the birthplace of the Buddha, marked by the famous Ashoka pillar and nowadays by Buddhist temples and pavilions built by many different nations, including Thailand, China, and Germany. Cloth decoration being installed on a Buddhist temple in Bhaktapur.

For the Himalayan Fashion exhibition, I spent time in some of the everyday garment and tailoring shops you see in each town, and also tried to capture a range of styles being worn on the streets. There was also a strong focus on textiles in many of the tourist shops, and I saw a demonstration of spinning happening in the streets, and of pashmina handloom weaving at the front of a shop in Pokhara. Many Nepalis wore best dress for the Tihar / Diwali celebrations in mid-October, and as this was also a popular time for weddings, some photographs of brides with their relatives were possible.  In one of the Bhaktapur squares the replacement of red fabric decoration was taking place on the exterior of a pagoda temple building, and this was captured in photographs.  Plus a guide gave permission for photographs of the interior of the temple the tour stayed at in Lumbini, which was lavishly furnished with Buddhist textiles. Photographs and costume are key components of the displays at the Gurkha Museum in Pokhara where Major Yambahadur Gurung took me round. The large photographs on the exterior of the building are very popular as backdrops for selfies and family group portraits. Gradually I came to recognize aspects of the dress of some of the many different cultural groups in Nepal, and appreciate them. A mural outside the UNICEF building in Kathmandu illustrates these in a child-friendly way.

Nepal was a fabulous place to visit, even though I did not climb any mountains (this time!). Leeds Museum collections will now be enriched by a contemporary Buddha Shakyamuni thangka, Tibetan style jewellery, and souvenir prayer beads, baby Buddha statue, and guidebook from Lumbini.

Our World Cultures collection contains over 12,000 items and illustrates Leeds’s historic links to the rest of the world, and the multicultural vibe of contemporary arts and culture. Elections Through our Collections