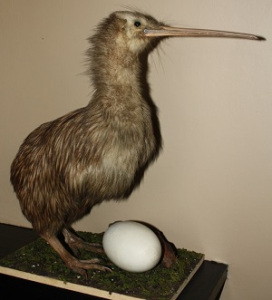 A kiwi and it’s egg, from the collection at Leeds Museums & Galleries.

Kiwis are the smallest of the flightless bird group, ratites. However, their eggs are the largest relative to body weight of any existing bird. To put this into perspective, the average kiwi weighs just 2500g and an average kiwi egg weighs a massive 371g. This is 15% of a kiwi’s body weight.

In comparison, an ostrich weighs around 100,000g and lays an egg weighing just 1314g.  This is only just over 1% of the ostrich’s body weight.

Despite the horror inducing image of producing an egg this size, kiwis are highly productive and an average adult female will produce one of these giant eggs every year. Females produce these eggs at little additional energetic cost. Half the energy needed to produce them is obtained from stored energy reserves rather than the bird desperately having to forage for food during egg development.

Furthermore when the egg hatches the female still needn’t panic about providing for her young as the kiwi egg contains an unusually high yolk content – 65% – which can sustain the chick until it is able to forage for itself.

The greatest benefit of producing such large eggs is that they hatch into highly precocial young. This means kiwi chicks hatch fully feathered with open eyes and within a week are able to feed themselves. Being precocious helps young to evade predators. However, before mammals were introduced to New Zealand kiwis had very little problem with attacks from predators.

Nocturnal predator species such as owls were only as large as 600g and therefore too small to prey on even young kiwis. In modern days, despite being nocturnal, well camouflaged and elusive kiwis are still preyed upon by introduced mammals including rats and stoats. The large and strong egg of the kiwi protects the chick as they are too large and heavy to be broken by rats. Despite these adaptations, smaller kiwi species are preyed upon for the first four months of life before outgrowing their predators.

Although there are some clear benefits of producing such enlarged eggs, the true reason why kiwis exhibit this level of parental investment is unknown, but given the choice it’s hard to imagine that they wouldn’t prefer the parental life of our humble domestic chicken.