Explore the fascinating history of the nation’s favourite board game with placement student Chelsea Knight.

This edition of Monopoly was made in Leeds by Waddingtons in 1993 to celebrate the centenary of the City. Only 500 of these games were printed. An older Leeds edition was printed in 1989, with only 500 of these games made to raise money for the Lord Mayor of Leeds charity appeal. The money raised went to Coun Carter’s Minicom Appeal that helped people that were deaf to communicate on the telephone. From the sales of this edition, £18,500 was raised for the charity. The Leeds edition of monopoly was chosen as one of ten objects to represent Leeds in The History of The World Project due to the importance of Waddingtons within the history of Leeds.

Waddingtons was a family run company that started out as a theatrical printer in 1896 and then moved on to printing card games in 1921. Waddingtons got the rights to the game Monopoly in 1935 the same year that Parker Bros, in the United States of America got the rights to the game. In the original UK edition of Monopoly, the streets on the Monopoly board are named after London streets, after one of the Waddingtons employees when down to London for a short trip with this purpose in mind. On the original board there is one error; Marlborough Street should be Great Marlborough Street. 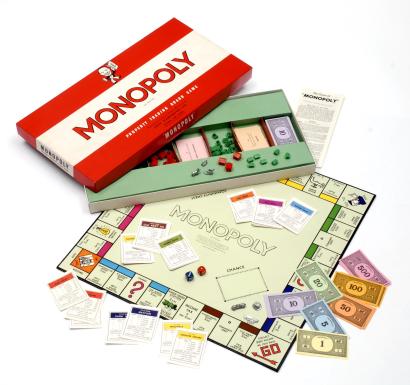 1969 Monopoly edition from the collection, on display in the Leeds Story Gallery at Leeds City Museum.

Other interesting facts about Monopoly and Waddingtons

In a letter written in 1933/34 by Winston Churchill, he thanked Waddingtons for a game of Monopoly that he was sent. He described the game as “most interesting”.

At the height of the Waddingtons company, they employed 4000 people in Leeds.

During World War II Waddingtons helped prisoners of war by hiding escape maps pinned on silk inside the games. The tokens were made out of real gold and real money was put with the monopoly money, once it was found out that German guards were not searching the boxes themselves. This was achieved by MI9 and Waddingtons working together to produce the games and setting up fake aid charites, sending both regular aid and escapee maps hidden in everyday objects such as cards, pens and of course board games.

It has been suggested that the game was invented by a woman that lived in Washington DC in 1903 called Elizabeth Margie. Elizabeth owned her own house, worked for a living and was not married which was unusual for women at the time. The game that she invented was called the landlords game. The purpose of this game was to educate people on her political views.

The pencil drawing was found many years later by a man called Charles Darrow, at the home of one of his friends. From this, he then created a game that he named Monopoly, before selling the game on to the publisher Parker Brothers. This game became a success and was played in a large amount of households. When asked in an interview for Germantown Bulletin “how he had managed to invent Monopoly out of thin air – a seeming slight of hand that had brought joy into so many households” he replyed “It’s a freak… Entirely unexpected and illogical”.

Meanwhile, Elizabeth was determined to get recognition for the board game that she created. She eventually got her game published in 1930s, also with Parker Brothers, which she sold the rights to for $500 and did not get any of the profits. Her game was more about landownership than making money: she wanted to reflect her views about how the rich that owned property were putting the people that they rented to in poverty. Leeds Museums and Galleries gets International How Do Museum Objects Impact Children with Special Needs and Disabilities?