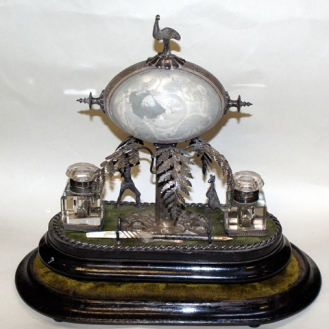 Last week Leeds Discovery Centre hosted a visit from Gaye Sculthorpe, a specialist in the cultures of Australian Aborigines, and currently Curator & Section Head for Oceania at the British Museum.

Born in Hobart, and a descendant of a Tasmanian Aboriginal woman, Tanganutara, Gaye was delighted to find that the collection includes a spear from Tasmania collected by George Augustus Robinson who lived and worked there from 1829 to 1839. It’s brilliant that such an early Tasmanian artefact has survived so long.

Shell necklaces from Tasmania are more common survivors, such as this irridescent marina shell necklace, probably from 1900-1930.  A small basaltic stone knife, possibly for cutting fish, is also from Tasmania. Many ceremonial items are restricted to Aboriginal men only. A public ceremonial object is this bull roarer from central Arnhem, used in  ceremonies after a death. Because it is used in public ceremonies, we can put an image of this object on the web without causing offence to Aboriginal people, who have campaigned for many years for museums to respect their wishes that especially sensitive or certain sacred items be kept private.

Howard Morphy, Professor at the Australian National University told us: “This bull-roarer (burala) is almost certainly from Milingimbi. It is a public ceremonial object used in mortuary or funeral rituals. It represents catfish and diver ducks, and is connected to the Gupapuyngu clan. The design represents the backbone or a series of backbones of catfish. In mortuary or funeral rituals the bull roarer is swung around to create the sound of the diver bird which dives into the water feeding off catfish.

“The catfish is an analogue for the soul of the dead person on its journey back to its ancestral lands. There is a film of a mortuary ritual at Milingimbi made by Cecil Holmes in the 1960s. The ceremony was led by Djawa, a senior Gupapuyngu man, who made many of the ceremonial objects for the ceremony.  Djawa was the father of the late Dr Joe Gumbula, who was a distinguished Yolngu musician and researcher of museum collections. Joe visited the British Museum collections just before the staging of the Enduring Civilisation exhibition.”

Other key Aboriginal items at Leeds include shields from different regions of Australia. Here we contrast a narrow parrying shield from South Australia with a leaf-shaped shield from Victoria, a shield from New South Wales which has this place name written on the front, and a broad oval soft-wood shield from central Australia. These shields are intricately carved with geometric designs, except the latter which has parallel vertical grooves as a pattern.

For a good skit on the problematic meaning of celebrating Australia Day from the Aborigine point of view, watch this year’s take on the annual Australian ‘Lamb advert’ on You Tube.

Visit our website to find out how you can view these objects on one of our Discovery Centre store tours.